Glasshouse Christian College (GCC) is a Christian Grade 12 prep school located on Queensland’s Sunshine Coast, leading the way in innovation through technology. All GCC students are educated on a campus with classrooms and school facilities using state of the art technology including data projectors, interactive whiteboards, and fully networked computers. GCC is named one of ‘Queensland’s Most Innovative Schools’ and recognized by Apple as an ‘Apple Distinguished School’, one of eight Queensland schools and 470 globally.

During its 20 years of activity, GCC has grown rapidly from 16 children and two teachers in 2000 to its current enrollment of 1,100 students. When the current principal joined GCC in 2008, his vision was to build the college’s success on technology.

“I always want our kids to be totally engaged and in love with learning… technology gives us a great tool through which this can happen,” said Mike Curtis, Principal of Glasshouse Christian College.

The school is now leading the way in innovation and access to technology among private schools in the Sunshine Coast. Right from the start, students have access to iPads and computers, and from grades 2 to 12, each student has access to a laptop. Every high school student receives a MacBook for their personal use at school and at home.

Technology plays a key role in innovative learning programs, including the DeLorean Project which offers 10th grade students the opportunity to engage in authentic, student-mediated learning. This program is focused on innovation, entrepreneurship and community spirit, using collaborative technologies, social media and online resources for their projects.

“[The DeLorean Project is] it is also a way of promoting what schools should be like today in the 21st century, preparing young people for the future, ”said Professor Shelley Dole, director of the School of Education of the ‘University of the Sunshine Coast. 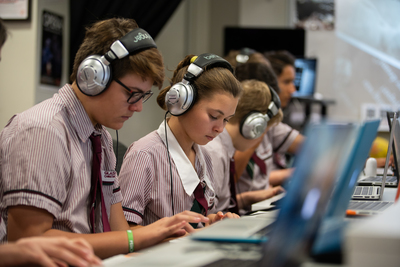 With a poorly performing wired and wireless network, GCC needed a solution that would provide students and staff with consistent and reliable connectivity across campus, and sufficient throughput to handle much of the audio and video content generated and transported over the network. GCC also has an internal IT team of just four people, so manageability was another critical factor.

“Schools are a hub of activity; they never stay the same and things are moving all the time in our IT environment. We were looking for a unique network solution. As an IT manager, I was looking for a product that would free up my team. My team was exhausted over and over again from solving the same types of network issues, ”said Roland Munyard, IT manager, Glasshouse Christian College.

GCC had tried Wi-Fi solutions from four different vendors over the years without success. It was a challenging architectural environment for Wi-Fi, with many different building materials and spaces used on campus. Additionally, GCC found that Apple devices were “notoriously sticky” when connected to an access point (AP), causing connectivity issues for students and teachers traveling around campus.

“The biggest and most difficult hurdle to overcome was a consistent connection with decent transfer speed. We could get the kids to stay connected, but they just weren’t getting the throughput they needed in the classroom, ”said Joshua Whysall, Network Administrator for Glasshouse Christian College.

The school’s rapid and organic growth also resulted in a complex and diverse core and edge wired network topology, making it difficult to deploy new devices and identify and resolve issues.

The most authentic version of software-defined networking

In evaluating a number of potential solutions, GCC was impressed with Extreme’s approach to Software Defined Networking (SDN), Analytics and Extreme Management Center (XMC), which provided the GCC’s IT team a single view of everything that was happening on the network, even on older HP switches still in use on campus.

“I believe XMC is at the forefront of innovation and has given me the one-stop shop and the competitive advantage that I was looking for,” said Munyard.

The Extreme environment is fully integrated with GCC’s security infrastructure and user authentication and identity management solutions, ensuring that new devices and users can be added instantly and securely to the network, all managed via a single XMC console.

Now, users can stream high-definition video to their iPad or MacBook without interruption as they move from hotspot to hotspot across campus.

“Companies all define SDN in a different way, but from our perspective, Extreme is the only one doing it right,” said Whysall. “To me SDN is software that works across the network where you have all the rules built in so that when you plug in a new device or log in a new user, it does what it’s supposed to do and works instantly and transparently.

After upgrading the core network with EXOS X690 switching and deploying Extreme Wi-Fi access points, GCC was able to leverage ExtremeAnalytics business insights and high-density Wi-Fi capabilities demanded by students . When the edge switches were subsequently upgraded across campus, GCC had the opportunity to completely redesign its network topology.

“The coolest thing is that about nine months ago we had to change the way our network operated. We have built the rules, VLANs and groups in the back end. You sync it all at once, and everyone in the school changes and starts working. It happens so seamlessly with Extreme. You don’t have to try really hard. It’s not like you’re trying to do something smart, it’s just networking, ”Whysall said.

“Extreme has the most authentic version of SDN in the industry; it has been an elixir for our network problems. Using Extreme’s software is like having another staff member, which is essential from an education perspective. It freed up my team, which had tangible benefits for the college, ”Munyard said.

In preparation for NAPLAN Online – which will see all Australian schools progressively move from the current annual paper-based tests to computer-based assessments for students in Grades 3, 5, 7 and 9 – the GCC IT team has ensured that each room campus classroom had strong and reliable Internet connectivity. While many schools and students across Australia encountered technical issues and connectivity issues on the first day of the NAPLAN Online testing in 2019, GCC students had a problem-free experience with the per-student analyzes available for GCC. from the Extreme solution as a valuable point of proof.

“Other schools have gone through hell. Our participation in NAPLAN went off without a hitch. We were untouchable when it came to the network, ”said Munyard.

“It has been amazing working with the Extreme team. They place customer satisfaction at the top of their criteria. My total cost of ownership is significantly lower and Extreme has worked with us to meet our budget requirements, ”continued Munyard.

CompNow has been GCC’s technology partner for several years, providing most of the college’s IT hardware solutions.

“With CompNow, it’s like dealing with a friend when you order. They are part of our ecosystem. They fixed all the issues I encountered. We have a lot of plaster ceilings, so we needed a special plate for our access points. They found the plates for me and got them to me quickly, ”said Whysall.

GCC expects to have a complete end-to-end wired and wireless Extreme networking environment on campus by mid-2020, and to introduce an increased level of automation for provisioning new devices and other administrative functions of the network.

“Having a robust, reliable and efficient network would be the key to the future success of any business, especially in the education sector which is as diverse and variable as possible,” said Munyard.

The college’s rapid growth has accelerated plans to continue expanding and redeveloping its facilities, including Phase III of its Performing Arts Center, which will contain a state-of-the-art 600-seat performance hall. GCC is also planning to open a second, entirely new campus, giving the IT team the ability to deploy a new Extreme software-defined wireless and wired network environment, ideal for a 21st century learning environment.

“If I had one word to describe Extreme, I would say success; because with Extreme you can be as successful as you want, ”concluded Munyard.

System at a Glance

How can learners and facilitators ensure a ...

How to create an inclusive online learning ...